DAST, meaning Dynamic Application Security Testing, is a form of black-box security testing. It simulates external attacks on a live application, checking for vulnerabilities. DAST tools don't have access to the source code.  Instead, they’re only able to check for vulnerabilities that get exploited by bad actors.

Generally, DAST runs in a QA environment, and it has to be running on a functional product. This means that DAST is usually run towards the end of a development cycle. It's important to note DAST is only for testing web applications and services, unlike other security tools.

DAST testing requires a skilled security expert so that the tests have the best coverage. During testing, DAST will simulate realistic attacks that you'd see in real-world scenarios. This makes it the most realistic approach to potential security issues in a live product.

In comparison, there is also SAST, also known as Static Application Security Testing. While they are separate methods with their own tools, SAST operates on a different angle compared to DAST. SAST tools can run early into a development cycle and can support a wider variety of software. Instead of DAST vs SAST, they should go hand-in-hand.

How Does DAST Work?

Once an application is ready for release, DAST should be one of the last security steps needed.

The reason DAST is "dynamic" is because it runs in a live environment, unlike other testing tools. This dynamic analysis is what differentiates it from other methods, like SAST. This means it can often find vulnerabilities under OWASP's Top Ten security risks. Cross-site scripting, injection errors, and vulnerable components are all too common among attackers.

During testing, the DAST scanner will crawl through pages and find all potential inputs. After this is complete, they begin attacking the various endpoints in a variety of ways. It will try several attack vectors to find different vulnerabilities.

Once complete, DAST tools will provide detailed reporting for each vulnerable URL. A typical report will include details on successful attacks, and potential solutions to fix the issue.

Using DAST in a software development lifecycle (SDLC), benefits both businesses and developers. Using these tools help show how a web application operates in a real-world environment. It can show potential vulnerabilities before a product goes live.

End-to-end testing is critical for continuous integration/continuous deployment (CI/CD). This ensures that a final release product is prepared against potential bad actors. Pairing DAST with OWASP's Top Ten can ensure an application is secure against some of the most popular and critical security issues.

There are several types of system testing out there. Why should you incorporate DAST into your SDLC?

DAST is designed to test without knowing the source code or architecture. It simulates a much more realistic attack than other types of testing. It's also able to point out critical issues such as authentication issues or memory leaks. Because real-world attackers use similar tools, it provides the most realistic results.

Its black-box style testing allows it to test applications across any language or tech stack. DAST tools don't depend on the tech stack used to develop an application.

Unlike SAST tools, DAST can find issues that arise in a runtime or an environment. SAST tools only look at static code, rendering them unable to find any issues when a full application is running.

DAST testing cannot be done until a product is near the end of the development cycle. The application has to be functional for DAST tools to scan and find potential weaknesses. DAST is also restricted to web applications and web services and is not for other software types.

Cost can also be a factor with DAST. It requires a skilled security expert to write and run DAST tests. Because it's run so late into the SDLC it can lead to extra development time right before a release window, if there are serious vulnerabilities.

DAST testing can also lead to a lot of false positives. Like any automated tool, it can't differentiate between expected or undesirable behaviour. It can only report the results that something happened. This can also add to development costs, for time spent going over test results.

It's important to remember that a good SDLC should have several testing points, with different testing software. Pairing DAST with SAST tools at the start of development can reduce security vulnerabilities.

There are several options for DAST tools to be incorporated into your SDLC. Here's a quick list of the best tools available to get you started:

Netsparker is by far the most popular option out there. Combining DAST with Interactive Application Security Testing (IAST) makes it prime for enterprise solutions. It offers different plans and can run in-house or in the cloud, for continuous monitoring and testing.

Acunetix is owned by the same parent company as Netsparker but focuses less on enterprise solutions and more on small to medium-sized businesses. It's also got a gentle learning curve for ease of use and integration.

Detectify offers a simpler solution for DAST testing, being easy to get up and running as fast as possible. It also provides rich and detailed reports after a scan has been completed. Some users have reported issues with WordPress and cluttered test accounts, so be wary.

Application testing is becoming a crucial part of any software development lifecycle. With the risk of malicious attacks rising every year, businesses need to be able to be prepared for any security risks. Implementing DAST offers an easy way to safeguard an application, and promotes good security practices.

With Uleska, teams can confidently start an AppSec program using open-source, commercial, and custom tools and then quickly change, add or scale tools as the technology and business needs evolve. Uleska also brings speed and scale when integrating into development tools, and reporting of metrics and risk.

By bringing security, DevOps and development teams together, we help reduce manual tasks so application security takes less time, cost and can scale, allowing teams to focus resources on the issues and metrics that matter. 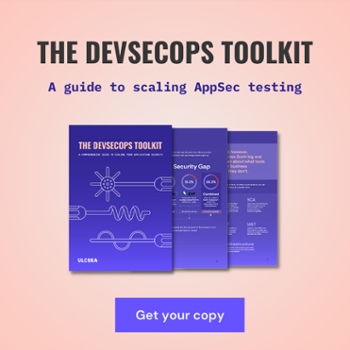 Security tools are an essential part of software development today, especially with the ever-increasing number of attacks we see every year....

Security teams frequently struggle with the volume of alerts and issues they are tasked with daily. On average, most enterprises receive between...

Software development has evolved into an incredibly complex machine, with several moving parts to keep track of. Teams get more extensive, and...

Application Security is a constantly evolving industry, with new threats and methods to combat them appearing regularly. One of the more recent...

How to improve security tool selection and customisation with Uleska Toolkits

We know starting your application security (AppSec) journey can be a little overwhelming. After all, choosing your tools from scratch and setting...

What is Application Security? A Beginner’s Guide

Did you know that over 79% of developers surveyed in 2020 stated their applications had 20 or more vulnerabilities on average? As the digital world...

Defining and breaking down Vulnerability Management

No system is perfectly secure, as proven by software analysis firm CAST, which reviewed 278 million lines of code and discovered more than 1.3...

Toolkits: Taking the guesswork out of security tool selection and customisation

There are thousands of amazing AppSec tools out there, but this can be both a blessing and a curse. While the headway and innovation we are seeing...

How to eliminate risk when scaling application security

Building robust application security is a lot like building a house—you want it done thoroughly, without any missing parts. However, there is a...

Cybersecurity has been a rising concern in the last decade. In 2021, researchers have seen 50% more attacks per week on corporate networks compared...

What is Shift Left? Ultimate Guide to Shift Left Security

With today’s fast development speeds, it’s hard to keep up with security practices for some organisations. This is especially true in the last few...

What is Software Composition Analysis?

Open-source software has become a vital part of development in the last decade. However, utilising these components often comes with several caveats,...

The saying goes: “Many hands make light work.” Nowhere is this more apparent than in DevSecOps where developers and releases outnumber security...